The Rural Decade: Painting By The Numbers 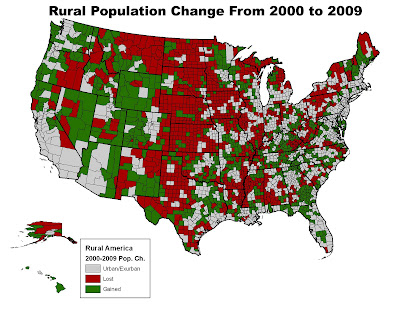 chart by Roberto Gallardo / Census
Today The Daily Yonder is offering fresh information and analysis on rural population trending over the last decade. The chart above is one of many in Roberto Gallardo's article; his work with these numbers is fascinating, and it tells a profound narrative of how America changed, county by county and region by region, in the opening years of this century. While many would not be surprised that rural population growth (2.9%) did not keep up with their exurban (13.1%) or urban (10.1%) counterparts, the regional and racial dynamics of these shifts tell a much more complex story.
Mr. Gallardo's analysis speaks for itself, so I'll not quote extensively from it here. Aside from the social and political implications of the numbers, I sense that all of us who are creating and engaging with the rural arts need to pay close attention. Both regionally and nationally, who are our rural arts audiences? Does this census data suggest to us that, yet again, we must rethink what comprises the rural arts?
The classifications of rural, exurban and urban in the research The Daily Yonder offers can be explained in greater detail here: where editor Bill Bishop explains the logic behind the definitions they reached with geographer Tim Murphy. The argument over "what is rural" is only slightly less contentious than "what is art," yet this system makes a great deal of sense. It corrects federal models which have led to all kinds of confusion, such as considering the The Grand Canyon "urban" and Cape Cod "rural."
As a final tool for reconsidering our how we phrase the rural arts, I'll offer this interactive map suggested by one of our readers. Forbes created this county-by-county map using IRS data to show inbound and outbound migration during fiscal year 2008. It not only shows the numbers, but also draws lines to all the places to which people migrated and displays their average per capita income. Here's a screen shot below of what this looks like for Wayne County (Detroit), with the red lines standing for out-migration, the black for in-migration: 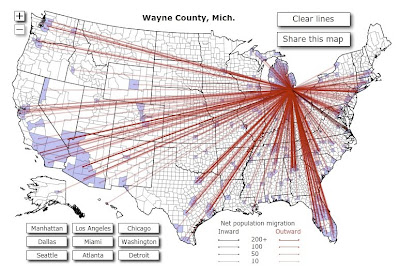