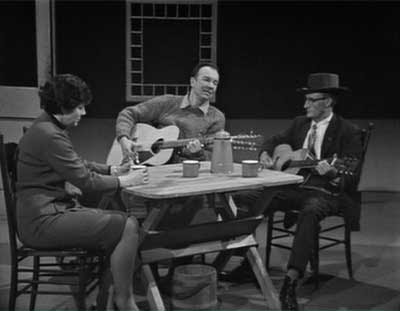 Roscoe Holcomb on Pete Seeger's Rainbow Quest television show
Here are some follow-ups on some artists and issues we've recently been discussing.
First off, here's a regrettably short NBC Nightly News report on the resurgence of community-volunteered movie theaters in the northern plains:

Visit msnbc.com for breaking news, world news, and news about the economy
Last week The Daily Yonder offered a fresh installment of Roberto Gallardo's analysis of the decade's census data--with an emphasis on the shifting population trends amongst rural young people. As you might guess from the preponderance of red below, rural America (like all of America, we learn) is getting older. However, Mr. Gallardo sees signs of growth and optimism in certain regions. 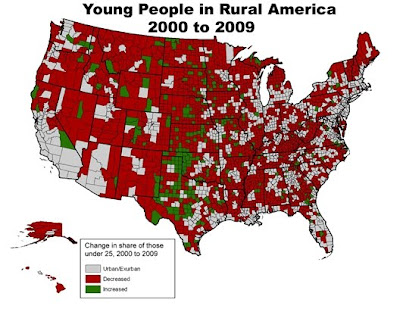 We would like to thank Benjamin for offering this article to us on our Facebook page: Mike Osborne, writing for The Voice of America, spent some time recently with Cherokee artists in North Carolina and found a success story in the midst of our nation's recession--these artists are doing good business while also finding the resources to insure that their cultural traditions thrive within the coming generations. His article can be found here, and also contains (at the bottom of the page) a five-minute audio clip of artist Davy Arch talking about how he came to work in these art forms.
Lastly, we'd like to present two video clips from Pete Seeger's Rainbow Quest television show, which he hosted in the mid-1960's. A little searching provides numerous performances online and speaks to the relaxed environment Mr. Seeger cultivated for the stunning list of folk, blues and country artists who stopped by to chat and play music. Kit MacFarlane, writing in PopMatters, has called Rainbow Quest an "Anti-TV TV" program that was more about the conversation and music than catering or pandering to audience demographics. He includes this quote by Mr. Seeger, one worth considering at this point now that we've traded tube televisions for laptops:

“This is one of the big worries of most people who like folk music. That television is going to obliterate region after region… Curiously enough, in spite of TV and everything ... I can see all around the country people doing things which are never heard of on TV, and it doesn’t make that much difference to them”