Behind the Curtain of the American Gothic 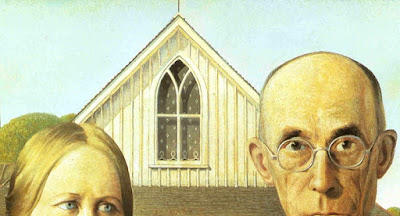 selection from American Gothic; Grant Wood
Shortly after last week's reconsideration of Grant Wood appeared online, I received a wonderful email from writer Beth M. Howard. With her permission, I'm going to reprint a selection below:

Hello Matthew,
I just found your blog and saw your post on the American Gothic House – and Tripp Evans’ new book and his take on Grant Wood. The reason I found your post is because I live in the American Gothic House.  The house sat vacant for several years until I discovered it, purely by accident, during a cross country road trip. After falling in love with its cuteness I also found that it was for rent. I’ve been here four months, and have since begun selling pies in the yard on weekends at my Pitchfork Pie Stand.  I was born in the neighboring small town of Ottumwa, a place I never thought I’d return to because it seemed so “backwater,” but now Ottumwa is where I do all my shopping, go to movies, and on the rare occasion, grab a burger at the classic 1930’s diner, The Canteen in the Alley.  I left Iowa to travel the world, I’ve lived in places including Nairobi, Stuttgart, New York and most recently Portland, Oregon. And now….Eldon, Iowa. It’s like Grant Wood said, “I had to go to France to appreciate Iowa.”

Through our subsequent correspondence, I've learned a little more about Ms. Howard, her life and her writing. The story of her travels away from Iowa, and the story of the relationships and adventures she nurtured along the way, all provide both a modern counterpoint and a moving epilogue to American Gothic.
Her new life in Eldon, Iowa, and her advocacy of pie-making as a back-to-basics community-building art are eloquently documented in her blog The World Needs More Pie. After traveling the world as a journalist, she moved to Stuttgart, Germany in 2003 to live with her husband Marcus. When he unexpected died in 2009, Ms. Howard dealt with her grief by taking what she calls her "leap of faith": setting out in Marcus's RV to travel the country baking pies for people from all walks of life. With the first anniversary of her husband's death  approaching, she turned the RV towards the one place she felt could provide the support she needed. Through this quest Ms. Howard discovered her own path back to Iowa. And she's been there ever since.
Between her pie posts, her blog also considers what it means to be a returning member of the rural diaspora, and how rural-urban relationships appear from that perspective--as in this post contrasting the local food cultures of Eldon, Iowa and Portland, Oregon. Ms. Howard is also in the process of writing a memoir about her experiences dealing, through her "leap of faith," with her husband's passing, and she also is hoping to produce a television series related to her experiences baking pie across the country. Last summer she judged pies for the Iowa State Fair.
As I write this, and as this is read on the internet, it's provocative to think about the story of the woman who is now herself writing from the other side of that famous gothic window: how this Ottumwa native has experienced a range of joys and of losses that the caustic, shifting eyes of Wood's couple do not anticipate. For the artist himself, who biographer R. Tripp Evans suggests encoded his own sexuality within his work, Ms. Howard's story and the open and generous human relationships she's found in her sojourn in Eldon, lead us to a promising conclusion: now, in 2011, this is a house where Grant Wood could live.
To learn more about the interior of the house, here's a video by Kyle Munson of The Des Moines Register:
Posted by Matthew