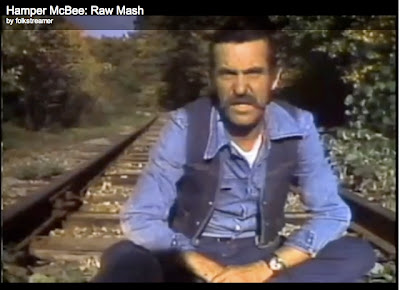 After a visit yesterday to the Folkstreams archive, I discovered that Hampber McBee: Raw Mash is now streaming online. Folks might remember that last summer the Twos & Fews  label released The Good Old-Fashioned Way, a collection of songs that became one of our favorite records of the year. After that post,  I received some wonderful notes from readers who had met Mr. McBee through the years. For those of us not lucky enough to have heard him sing or tell stories, Raw Mash will be the next-best-thing.
This thirty minute film was produced by Sol Korine and filmed by Blaine Dunlap, with sound editing by Ron Judkins. Folkstreams tells us that Mr. Korine and Mr. Dunlap "were pioneers in their use of early portable video equipment to make independent films," and Mr. Dunlap has provided extensive notes on how they filmed and edited with this technology. Here's Mr. Korine, in a Prefix Magazine interview with Mike Burr, speaking to the sense of urgency and play that surrounded the making of Raw Mash:

Was [Hamper McBee] on board with the project or did he have to be convinced?
We were living in Tennessee at the time, and had moved there in 1973. The film was shot in 1978, and by then we had established a network of contacts. The people who were living in these communities came to realize that we genuinely appreciated the culture, and they totally embraced us. They saw that it was important to get their way of life on film, because society was changing in a way that would eventually mean the end of the culture. Once cable television came in to these areas, nobody cared about what your grandfather had to say or how things had been done for the preceding generations.
What do you remember most about making the film?
It was 30 years ago, so really the film has become more real to me than the moments. I would say that what sticks with me most is just sitting and talking with Hamper. He was an alcoholic and would have to drink 24 cans of beer a day; that was his maintenance. We would sit around talking and drinking beer, and Hamper would tell stories. One that stands out particularly was when he talked about the first time he got the DTs and started hallucinating. A giant frog, “the size of a number two washtub,” jumped on him and began licking his face. That story says a lot about why Hamper was such a memorable person. He had this basic essence that drew people toward him, and he was able to be poignant, but his stories never lost a sense of humor.

Hamper McBee: Raw Mash can be streamed here; I also recommend reading this article on Root Hog or Die, the site maintained by the curator of the Twos & Fews label, Nathan Salsburg.
Posted by Matthew