The Rural-Urban Reality of the Local Foods Movement 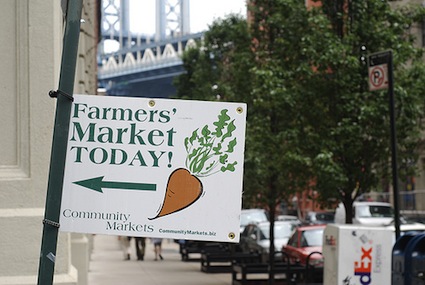 This week begins with a another must-read piece on the Daily Yonder: "How Rural is our Local Food Policy?"

One of the elements of the rural-urban exchange which gives many of us great hope is the emergence of farmers' markets, CSAs, and the overall awakening to the importance of agriculture many urban and suburban folks have demonstrated. These cultural tendencies suggest, with the right kinds of dialogue, that this cultural moment could reveal the connectedness of urban and rural communities -- and even suggest a way through which folks in the cities and suburbs might find themselves invested in a sense of rural identity.

While those aspirations are in themselves lofty long-term goals, they are undercut in the short-term by the realities of participation in the local foods movement. Trey Malone and Brian Whitacre's piece today in The Daily Yonder clarifies the reality of these rural-urban partnerships -- and suggests there is much work to be done on the federal and local level.

This is a must-read, with some extraordinary maps that express data along the rural-urban continuum codes. Here is a very brief excerpt:

Notably, in counties with high levels of direct sales for human consumption (Figure 1) or community supported agriculture (CSA) (Figure 2), we find that these areas:
•    Are predominantly located in the most metropolitan counties (55% of high direct sales counties and 51% of high CSA counties are in codes 1-3 [the most urban counties]).
•    Have an average population density of between 469 and 994 people per square mile (compared with an average of 16 people per square mile in counties with codes 8-9 [the most rural counties]).
•    Have median household income averages of over $50,000 (compared with an average of $38,600 in counties with codes 8-9).
•    Are usually located in coastal regions – far away from where average government payments are highest.

We all know that we have many different "rural" Americas. While Malone and Whitacre's piece suggests points of opportunity of farmers, it also suggests that we have two different local foods movements -- one located within driving distance of a coastal city, and another placed in the regions of the country where the philosophies and immediate benefits of healthy, local food are desperately needed.
Posted by Matthew