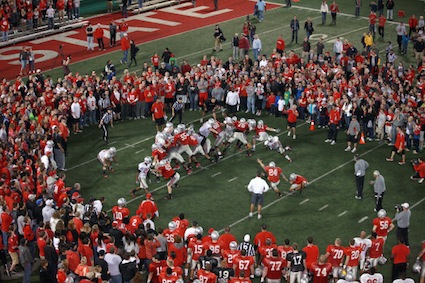 I was at a party filled with English PhD students and I was asking a Cajun girl about New Orleans. When she showed amusement at my curiosity, another student piped up. “Kenny is a regionalist!”

Out of the closet. So I proceeded on to research, asking students from various parts of the country what they thought of the Midwest as a regional entity. Intelligent interlocutors pointed to history, to contemporary cultural analysis, to literature, to socio-economics. I turned to the only fellow Iowan in the room— who also happened to be one of the few who wasn’t a student—and asked him what he considered to be the Midwest. Matter-of-factly, he responded “The Big Ten.”

A damn good point. And one I in all my scholarly wisdom had never thought of.

The rise of collegial and professional sports as billion-dollar industries have likewise led to a rise in regionalist spectacle. Game days become liturgical and individuals spend hundreds on vestments to display allegiance. America has always loved sports and has always been regionally diverse. Now, though, it’s harder to pinpoint regional identity based on accent, food, or ethnicity; instead, we buy our jerseys and caps.   On NPR’s “Morning Edition,” Frank Deford recently spoke of “Southern Pride and the Southeastern Conference:”

But, of course, it's impossible to ignore the pride the South feels for its football. As no other section of the country remains so closely connected — "Save your Confederate money, boys!" — so does no other section of the country boast of a regional predominance in any sport. Just because the Yankees have won all these years, the Northeast has never said, "Hey, we got the best baseball up here." It's impossible not to sense that because the South usually brings up the rear in important things like health, education and income, it looks to college football to enhance its national standing. We're No. 1, well, in something else besides beauty pageants.

I don't know when exactly the SEC took over America. I know this is hard to believe, but the epicenter of college football used to be in the Midwest. I'm so old, I can remember when Notre Dame actually mattered, and the real tough players were supposed to come from Western Pennsylvania and Ohio.

One can’t argue with the tremendous success—and dollar value—of the SEC in recent years. But I quote Deford not to proffer a competing Midwestern narrative of football supremacy (for that, I’ll give James Wright’s beautiful football poem “Autumn Begins in Martins Ferry, Ohio”. Instead, I quote Deford simply to illustrate the incredible intertwining of sports and regional identity, both influencing each other within terribly market-driven forces.

I push a simple formula with my own conclusion: Sports are good. Regionalist identity is good.  Money isn’t bad. But money can turn sports from regionalist narratives rich with history of stadiums and heroes into the shallow spectacle of a game-day beer commercial. Kick back with some buds and some Buds® and don’t forget to carefully craft your self-image with NFL Network, Our Proud Sponsors, and jerseys, available online.

Again, cash isn’t bad. In fact, owners may find more money to be made precisely by acknowledging old regional identities rather than peddling shallow party image. Sports fans like a good time, but they are becoming more intelligent, more sophisticated, and more aware of history. History and the regional identities it shapes will continue to be a guiding factor in sports narrative. Do our new stadiums do justice to the old? Do our mascots make sense given our place? Do we preserve the stories of old heroes or simply peddle the merchandise of the new?
Posted by Matthew