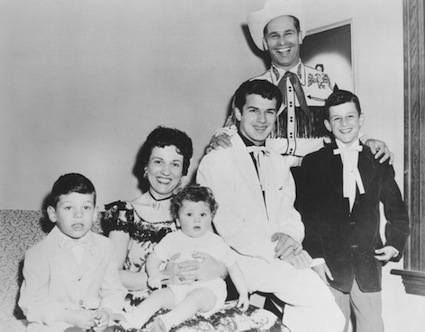 
In the twin cities of Lewiston-Auburn, Maine, a young girl named Rita listens to Patsy Montana records in the bedroom she shares with her sisters. Her parents are millworkers, among the hundreds of French Canadians who have come to the towns to work in the textile and shoe factories along the Androscoggin River. Rita herself was born in Quebec, but while growing up in Maine during the 1930s, she falls in love with the country and western barn dance shows she hears broadcast on local stations. The Katahdin Mountaineers are the most popular act in the state, merging regional Franco-American dance reels with the sounds of being streamed into the state via radio and records, from places to the south.


Across the country, radio barn dance shows were gaining in popularity as transmitters began beaming local sounds beyond their immediate area. West Virginia’s WWVA, situated in the Ohio Valley surrounding Wheeling, had a greater reach up the East Coast than even Nashville’s Opry on WSM. By the 1940s, WWVA’s Wheeling Jamboree could be heard nightly through northern New England and into Atlantic Canada. Southern musicians made popular by the Wheeling Jamboree began travelling into New England to perform for fans, and Northern musicians saw WWVA as the next step to stardom.

Young Rita, now a professional singer in her own right under the stage name Betty Cody, began performing around Maine as a member of the Hal Lone Pine Show. Lone Pine  (born Harold Breau, near Bangor) and his newer brand of flashy, stage-show country quickly caught the attention of radio and live show audiences throughout the state and into the Maritimes. With Lewiston-born guitarist Ray Couture, the trio began penning songs that showed off Betty’s vocal range, Hal’s swagger, and Ray’s tense, evocative guitar.


Playing on the biggest radio stations in Maine and the Maritimes, selling out shows, and touring the region didn’t satisfy the Lone Pine musicians for long. Betty and Hal, now married with small children, moved the band to Wheeling to become a part of the WWVA Jamboree. Strangely enough, by moving out of Maine and to a station with a 50,000 watt transmitter, they were able to increase their popularity back home because the Jamboree was one of the most popular nightly shows in Maine and eastern Canada. Their performances on WWVA also landed them an RCA recording contract and tour through the Southern states. For Betty, this newfound acclaim also brought her the attention of Nashville, the Opry, and manager Colonel Parker -- but that interest did not extend to Lone Pine or the rest of the band.  Nashville wanted Betty, without Lone Pine.

But Betty turned it all down. She had already returned her sons to Maine to live with family and she grew weary of life on the road. Relations with Hal were strained, as she became seen as the star of their duo, and he was known to occupy himself outside of their marriage with some frequency. Once their RCA and WWVA contracts ran out, Hal and Betty returned to Maine while Ray, their original guitarist, stayed on in Wheeling for another forty years.

Once again, the smallness of Maine crept in on Hal and Betty and after only a brief stay, they gathered up the children and moved the family to the country circuit of Canada. Teenage Lenny, through watching his parents on stage and early lessons given by Ray Couture, played guitar with a virtuosity beyond his age. He joined up, and tried to support his father’s efforts by playing lead, but grew tired of the limitations he found as a country musician. Enamoured by Winnipeg’s jazz scene, Lenny tried to improvise in his live performances, which enraged Hal. To Hal, a professional country musician put on the same show, the same way, with the same level of perfection every single time. Lenny was bored and he broke away.

With his relationship to his father torn, Lenny moved to Nashville and reconnected with Chet Atkins, who had worked with his parents on their RCA sessions years before. Through Chet’s advocacy and Lenny’s unusual gift, he pursued his interest in merging styles while becoming one of the most sought after session and solo musicians in 1960’s Nashville. Recording contracts and tours followed, which sometimes brought Lenny back to Maine -- where he could visit his brothers and mother, who had left Hal behind in Canada for good. Betty, like many Franco-American Mainers, returned to steady employment in Lewiston’s textile mills. She remarried. On weekends, she performed solo shows at a local ski resort. Without his family, Hal moved back to West Virginia to rejoin the Wheeling Jamboree, until he passed away unexpectedly in 1977.

Lenny had settled in Los Angeles by the early ‘80s, making a living as a musician and teacher while his reputation in jazz circles grew. Tragically, he was found dead in his swimming pool in 1984 -- his death ruled a homicide, unsolved to the present day.

Betty Cody still lives in her apartment above a shop in Lewiston, Maine. She has been known to perform at country fairs in the summer in recent years. 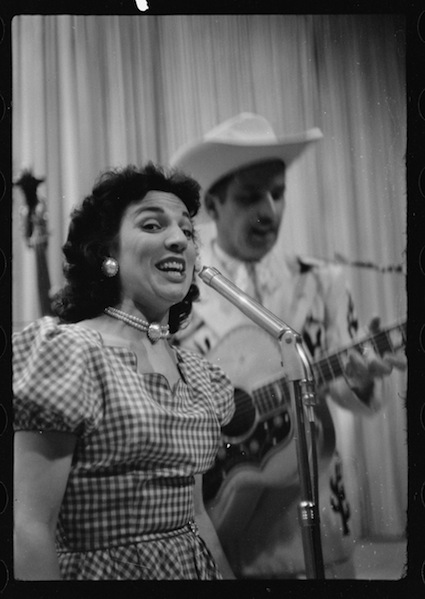 Hal and Betty; Library of Congress
Posted by Matthew