Discovering Christ in a Michigan Laundromat 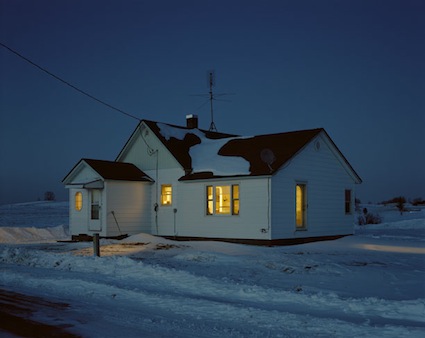 from the On Wisconsin project; Mark Brautigam, as seen on fly over art


Please find below an excerpt from "That Story," by Jack Driscoll, a work that was awarded a Pushcart Prize this year after appearing in print in The Georgia Review. Polly Atwell's previous piece on Driscoll's fiction can be read here.

Wherever my mom finds these articles I haven’t a clue. All I know is that she clips them out and hands them to me to read. “Look, Fritzi, another miracle,” she says, the most recent having occurred somewhere outside San Francisco.
For a good laugh I pass them along to Dieter and Brinks while we smoke in my dad’s Plymouth Fury, the odometer frozen at 172,605 miles. The car is up on blocks, transmission shot and the hubs painted purple. Rear risers but no tires, and snow up to both doors so we have to crawl inside, like it’s an igloo or a fort, and always with some half-wrapped notion of someday firing it alive and driving hellbent away from Bethlehem. Not the one in Pennsylvania, but a town so remote you can’t even locate its position on a USGS map.
And therein resides both the irony and the farthest far-flung implausibility that somebody hereabouts discovers a visage of Christ in a lint screen at the local Laundromat, and that then, along with our name, we got ourselves a shrine and a destination to boot. “Imagine it,” my mom says, but a million pilgrims desperate to put a knee down in this nothing town suddenly adjacent to God and heaven confounds even the dreamer in me. And yet, as misguided as such an influx sounds, it’s what she’s apparently banking on. Which might explain why she’s hand-painting all those baby Jesus Christmas ornaments, preparing to make a fortune off the endless caravans of sinners soon to arrive here in the provinces. But she says, “Nope. Uh-uh.” They’re nothing more than another scheme designed to fill and quiet time. Besides, she says, each month at the diner she always manages to sell at least a few to the truckers to take home to their wives.
Posted by Matthew