Standing Up For Local Radio And Local Culture 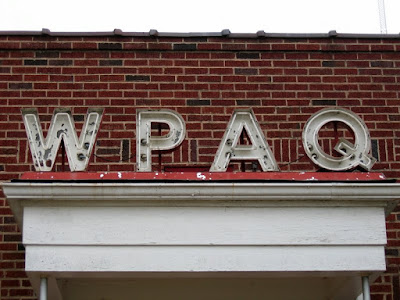 photograph by Kelly Kress of Learn NC
Yesterday afternoon NPR's All Things Considered presented a feature on "The Merry-Go-Round," a weekly live music show broadcast out of Mount Airy, North Carolina on WPAQ radio. "The Merry -Go-Round" has been their Saturday morning staple since the station first went on the air in 1948; in fact, the station has remained true to founder Ralph Epperson's original mission, despite its place in an era where radio is increasingly pushed to follow homogeneous programming standards. Here's how WPAQ describes its relationship the community:

Fortunately for his friends and neighbors, Ralph Epperson believed in individualism and he had a mission in mind:  to serve his community.  In his application to the Federal Communications Commission, the young man pledged to reflect the cultural and musical values of the people in his station’s listening area.  He said he would present local talent, and he made good on that promise from the start.  Unlike many other station owners, however, Epperson largely stuck to his mission over the next six decades.  Live music by local musicians is still presented each Saturday on WPAQ’s Merry-Go-Round program.  Epperson himself hosted another program, the Blue Ridge Spotlight, on Saturday afternoons, on which he presented early recordings from the WPAQ archives and other recordings of area musicians and WPAQ’s weekly play lists are peppered with recordings of local musicians.  Preachers still hold forth on weekday mornings and nearly all day Sunday.  Announcers read the obituaries at least three times a day, and the Pet Patrol helps listeners get back together with wandering critters from blue tick hounds to hogs and heifers.  The music lurches from old time and bluegrass to easy listening after the evening news.  Ralph Epperson explained his philosophy to reporter Michelle Johnson of WFDD this way as she prepared a story about WPAQ for National Public Radio: “If people are doing the same thing in 25 places up and down the radio dial, why should I be number 26?”

If "The Merry-Go-Round" stands as one of the last live (and local) music shows on radio, at least in the old-time genre, then it is as much a testament to how Pete Seeger's belief in technology's ability to sustain traditional music can exist even after the culturally-deadening effects of the Telecommunications Act of 1996--the legislation that, with the sweep of President Clinton's pen, removed regulatory protections for local broadcasting outlets.
However, we can now hear WPAQ live online from any location in the country, with unfettered availability as long as Net Neutrality is not a concept that meets an end similar to many small-market broadcasting outlets after 1996. In many ways, what the story of WPAQ presents to us is how such seemingly distant regulatory issues are rural issues, and how they can forcefully alter the contours of the rural arts. Listening to WPAQ, hundreds of miles from Mount Airy, it's hard not to be moved, to feel the need to work in our own finite and individual ways to spread the word about Net Neutrality--and to protect our access to treasures like WPAQ and "The Merry-Go-Round."
What other local radio stations are our readers listening to, either on the radio or on the internet? Feel free to drop us a line or comment on our Facebook page; we would love to follow up with more features on these stations, and to add them to our Rural Arts Map.
Also, many thanks to Lisa from Legal Ruralism for alerting us to the NPR feature.
Posted by Matthew