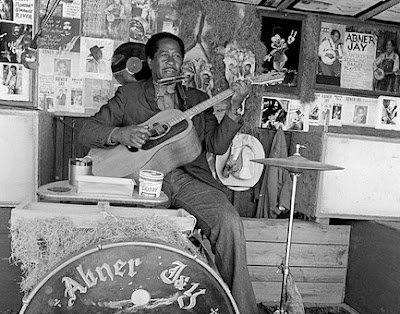 
In this post, and the previous post below, we're considering the life and music of Abner Jay--a figure whose art cuts across so many themes central to the American experience: race, class, regionalism, history, and place. Mississippi Records has just released Mr. Jay's final recordings, entitled Last Ole Minstrel Man.

I've heard from a number of folks in the two days since the previous post, readers who have been bowled over the emotion, creativity and cultural import of Mr. Jay's work. Today I'd like to share more information and links. Beyond that, the best thing to do is to sit down with his records, turn off the phone, and just listen.

Abner Jay was born in Fitzgerald, Georgia in 1921, into a family of sharecroppers. Though various internet sites tell the story slightly differently, Mr. Jay's grandfather--and perhaps his father--had been slaves. The legal terminology, however, is of less import than the realities of those early years of his life. Amoeba Records' blog offers a generous transcription (from the current release's liner notes) of Mr. Jay's own recollection of this time period:

"Abner was a slave sixty five years after the slaves were freed, because Abner grandpa and Pa love the slave life. Abner was hired out to white plantation owners when he was at the age of six. Abner worked as a slave side by side with his grandpa, a former slave. Abner could not and did not receive his pay until after he was twenty one years of age. Abner ate and slept in the barn with the mules. The White folk would hand his food out of the back door to him in a pan, mostly left overs and the food the white folk dogs wouldn't eat...

Mr. Jay later toured with minstrel and vaudeville shows, eventually striking out as a young man on his own--a one man band. Along the way he became friends with Muddy Waters, Chuck Berry, James Brown and, according to some sources, Elvis. He was also the agent and manager to the phenomenal gospel singer Sister Rosetta Tharpe. In the final decades of his life, Mr. Jay traveled from town to town in a mobile home that could convert into a performance stage

Again, Chris Campion so clearly articulates the many attributes of the sound that might surprise attendees of a local fair or flea market:

Jay finger-picked a bittersweet but heartfelt comic blues on a long-necked, six-string banjo that he said had been made in 1748. It had been passed down to him by his grandfather, Louis W Jay, born a slave and later to teach Abner many of the traditions he made it his mission to keep alive.

He was almost certainly the last living exponent of the 'bones' - a musical tradition that involved playing percussive rhythms using various cow and chicken bones that had been dried out and blanched in the sun. Jay claimed to have a repertoire of over 600 songs, which he sung in a bone-shaking basso profundo voice, the legacy of a battle with throat cancer that almost felled him in his twenties.

He would perform field songs, minstrel tunes and Pentecostal hymns interspersed with his own nuggets of homespun philosophy, off-colour yarns and side-splitting one-liners. 'What did Adam and Eve do in the Garden?' runs one. 'Eve wore a fig leaf... and Adam wore a damn hole in it.'

Jay's own compositions were decidedly secular in nature and found him musing on atypical themes such as depression, the Vietnam war and substance abuse. Titles include 'The Reason Why Young People Use Drugs' and 'The Backbone of America is a Mule and Cotton'. 'I crave cocaine,' he moaned during crowd favourite 'Cocaine Blues', exaggerating his diction for comic effect. 'But I can't find nothing here in Atlanta. Cos those hippies dun used it all up... I want sum'tin to pep me up!'

For more information,  The Down Home Radio Show features Eli Smith's interview with Eric Isaacson of Mississippi Records; the two discuss the label's release of The True Story of Abner Jay as well as the true story of the record label itself, which has become a faithful steward of many later Abner Jay re-issues.

Here's a rare gem: an excerpt from Mr. Jay's final performance at the 1993 Grassroots Festival in Trumansburg, New York. We see in this personal rendition of "St. James Infirmary Blues" what Mr. Isaacson means when he says that people called Abner Jay "the black Bob Dylan." Even more forcefully than Dylan, Abner Jay stood with one foot in a lost, folkloric America and the other in the ground of rock 'n' roll, radio, and television. The great achievement of his music is that these contradictions are fused together in ways that can be  both deeply-moving and profoundly unique.

We learn that he passed away days later, on his way back home.