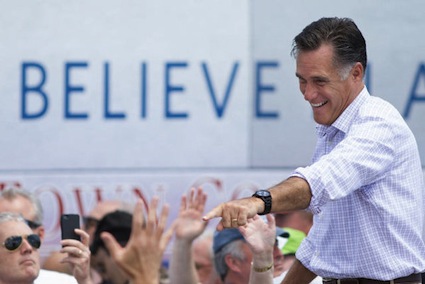 
In another entry in the politicalization, and polarization, of Art in the United States, Fortune magazine leaked this excerpt from a forthcoming interview with Republican Presidential Candidate Mitt Romney:

First there are programs I would eliminate. Obamacare being one of them but also various subsidy programs — the Amtrak subsidy, the PBS subsidy, the subsidy for the National Endowment for the Arts, the National Endowment for the Humanities. Some of these things, like those endowment efforts and PBS I very much appreciate and like what they do in many cases, but I just think they have to stand on their own rather than receiving money borrowed from other countries, as our government does on their behalf.

As we've written before, in the case of the Kansas Arts Veto, this represents a sad confluence of forces, of Culture Wars bullet points that impose a political rhetoric on artmaking itself (liberal, Blue State) and ignore, on the most basic level, the role nationally-funded arts have played in American Democracy, and even in "family values." Further, this ignores the overwhelming data suggesting how -- beyond the intangible benefits of artmaking -- such creative collaborations can transform local economies. The notion of "creative placemaking," which the NEA has brought to life in its Our Town grants for the last two years, is the most significant example of this thinking and its presence in the daily lives of folks across the country.

As Ezra Klein wrote last week in the Washington Post, the cuts proposed above would not drastically alter the budget outlook. Reading between the lines here, it's clear that the Arts have yet again (along with Amtrak) found themselves caught in the crosshairs of reductive political rhetoric:

Here’s how it breaks down: In fiscal year 2012, the federal government spent $1.42 billion on Amtrak, $444 million on PBS, and $146 million on the National Endowment for the Arts and Humanities. Getting rid of all these subsidies would have saved the government about $2 billion this year — chump change relative to the scale of cuts that Romney wants.

Undoubtedly, we are in a national moment where properly-applied fiscal responsibility is necessary. Regardless of our political persuasion, and of our level of engagement with the arts, we must also recognize the necessity of fiscal creativity.