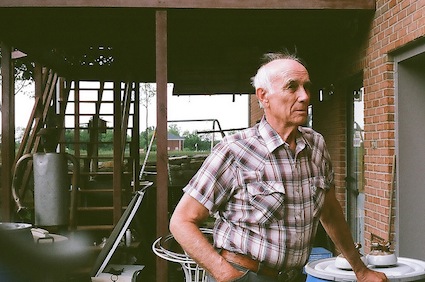 all photographs by Jennifer Joy Jameson


By Jennifer Joy Jameson, Notes From The Field editor

I have a few friends who were recently married—the kind of friends who first told me about the art environments of Grandma Tressa Prisbrey, of Kenny Hill, and the kind I found myself convening with after visiting Howard Finster’s Paradise Gardens for the first time. In celebration of their union, I hoped to find a gift for them that was not just handmade, or unique, but something that has a particular redemptive quality to it. These are friends who recognize the beauty and immense potential in everyday objects, places, sounds, and stories that have otherwise been thrown away or seen as worthless. So, in keeping with this orientation to the world, I was glad to use their wedding gift as an excuse to get in touch with Middle Tennessee sculpture artist and gospel singer John Baird.

I came to know about the multi-form creative works of John Baird last summer in Nashville. I was assisting folklorist Evan Hatch, who was coordinating the Tennessee Folklife program at the 73rd National Folk Festival – an annual, traveling festival produced by the National Council for the Traditional Arts. Evan, who has documented John’s art and music for years, invited him to exhibit and sell his metal sculptures at the festival. Over the course of the 3-day festival, I found myself regularly breaking from duty by chatting with John and his wife Ruby, a talented fiber artist. I even convinced John to sing a few of his original gospel tunes for me—songs that he performs from time to time at churches near their home. 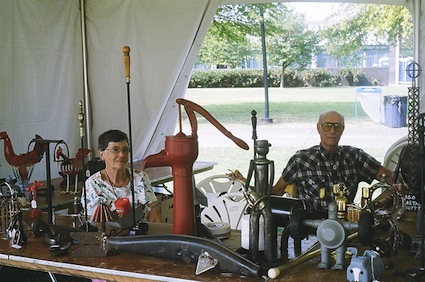 The Bairds reside in Kittrell, Tennessee, in the countryside of Rutherford County—just down the old 70 Highway from Murfreesboro, the college town of Middle Tennessee State University. John grew up in rural Rutherford County, first learning to weld as a young man in the Future Farmers of America. He did not regularly create works of visual art until the 1980s, around his retirement from a long career working as a farmer, a salesman, and a truck driver. For years now, he’s collected scrap metals of all kinds and crafted them into animals (or animal-type-creatures), people, or whatever potential John sees in the mismatched shapes of his mounting collection of thrown-away metal parts. His sculptures range in size and subject from miniature motorcycles or water pumps, to oversized spiders measuring about 4 feet, to a free-standing take on the Eiffel Tower (titled the “Awful Tower”), to a cowboy made of old horseshoes. After last year’s festival was over, I got up the nerve to ask John how much it would be to purchase the bird made out of antique sewing machine parts. I bought it, and proudly perched the bird on my mantle, where it reminds of the ability to form new and lovely out of old and odd. 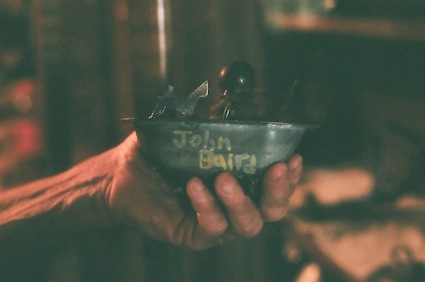 On the afternoon that Evan and I rode out to the Baird home in Kittrell, John and Ruby kindly poured us tea and toured us around some of the finished works. In examining John’s sculptures, I moved back and forth from a sort of drop-jaw awe in response to the skilled craftsmanship of the pieces, to keeling over at the clever and lighthearted spirit of the artwork. John was pleased to find me laughing.

When I asked John if he draws influence from the landscape or his community, he wasn’t too sure what to say. However, it strikes me as a rather intuitive application of both landscape and community in making such use of his surroundings—these being the scraps that he finds at yard sales or junkyards, and the metal bits friends and neighbors regularly give him with the intention of use in his art. 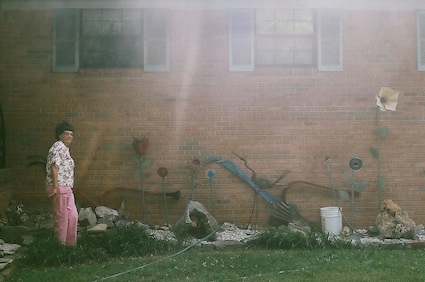 The front and back yards of the Baird home are covered in painted roses as tall as Ruby, and lined by a wall made from rocks John has hunted with a neighbor of his. In the backyard, John and Ruby have, together, built a rock garden out of flowers and wagon wheels, featuring rocks shaped like animals that I could have sworn John carved himself. Instead, he looks for rocks in their natural form, which happen to be in the shape of rabbits or deer—a skill John uses in coming up with ideas for his metal sculptures. He told me, “If I come across a scrap of metal, I see if it’s like something…maybe a head for [an animal], or a grill for a car [sculpture]. I just start from one piece and go from there.” To me, this speaks to his ability to see great possibility for human communication through the careful bricolage of the discarded and the ordinary. This is the redemptive understanding, the aesthetic worldview that I knew the Bairds shared with my soon-to-be-wed friends.
Posted by Matthew