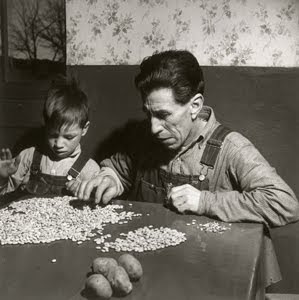 "Trampas, NM" (1943) by John C. Collier, Jr.
The New Mexico Museum of Art is currently offering an exhibit of photographs taken during the Farm Security Administration program, which ran from 1937 to 1942. Though it was a program begun by the Department of Agriculture to aid farmers during the Depression, specifically in the Dust Bowl, both the scope and the manner of the Administration's programs was far reaching--as demonstrated by this collection of work focused on life in New Mexico. Here's the museum's introduction to the exhibit:

In the mid-1930s, the Farm Security Administration was established as a part of the New Deal. For ten years, the Information Division of the agency hired writers and photographers to provide press and educational information to the public. While photography was not the primary purpose of the F.S.A., its outstanding photography program is perhaps what the agency is best known for.

John Collier, Jack Delano, and Russell Lee all documented life in New Mexico for the F.S.A.  The exhibition in the Governor’s Gallery draws from the New Mexico Farm Security Administration Collection at the New Mexico Museum of Art. While the photographers documented both the environment and the people of New Mexico, this exhibition focuses on images of the people and events ranging from the Bean Day Rodeo in Wagon Mound, to mass at a Trampas church, to workers for the Atchison Topeka and Santa Fe railroad.

The museum site provides this information on the photograph above:


“Man and boy sitting at a table sorting beans, potatoes sit on table also, both people have on bib overalls and long shirts.” In a portrait by Collier, the older man from Trampas in this image is identified as Juan Lopez.  A portrait was also made of Lopez’s 99 year old grandfather Romero.