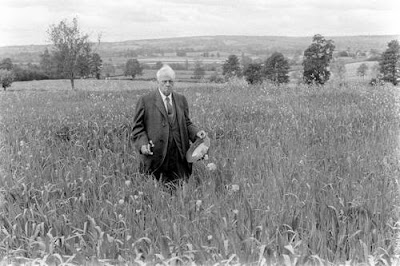 
I am at present reading Lawrance Thompson’s masterful and authoritative (as well as authorized – more on this below) biography of Robert Frost. Frost’s childhood was marred and terrorized by a consumptive drunk of a father, much consumed in his own erratic moods and Democratic party politics. Distant, cruel and petty his father would often completely ignore the future poet, busying himself with speech and editorial writing, as well as other campaign activities. When Frost was a little older, though, his father would bring the boy with him on his politicking errands. Frost watched his father labor in his errands and listened as his stump speeches seemed more and more to flag:

“He tried to excuse his father, by noticing new signs of illness. There was no question but that the chronic ailment had grown worse, and even his father seemed to acknowledge it, in a strange way. In his campaigning, whenever he passed near the slaughterhouse, he would stop just long enough to buy and drink a cup of warm blood ­– while Robbie, watching, would fight against nausea.” (p. 25 [1981 edition])

This all strikes me as an essentially rural, homemade and surely ancient cure for what ails you: replace like with like, i.e. homeopathy – in this case, blood with blood. While it may not always yield the desired results – tuberculosis was still little understood – there is something honest and even mythical about the ideas behind it. What’s most striking to me, though, is that this essentially rural experience was available to Robert Frost 125 years ago in the bustling and booming city of San Francisco. As I mentioned above, Thompson’s biography was “authorized” by the poet and one presumes that the source of this story is Frost himself. How many of our future urban artists will long remember a similar experience? How many of the rural?
Posted by Matthew