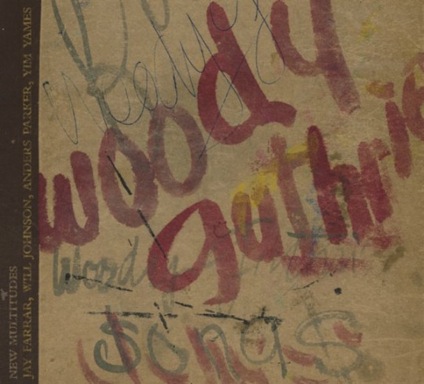 We've just learned more about one of the birthday year's most anticipated releases: New Multitiudes, an effort that pairs unpublished lyrics from The Woody Guthrie archives with new music. A band comprised of alt.country luminaries has reimagined this material: Jay Farrar (of Son Volt and Uncle Tupelo), Yim Yames (or, Jim James of My Morning Jacket), Will Johnson (Centro-matic frontman), and Anders Parker (of Gob Iron and Varnaline).


A first cut from the record, "Old L.A." is now available. Lead vocals here are covered by Anders Parker:


The accompanying press release offers some context, and also helps illuminate the turmoil and disconnection between the instrumentation and the lyrics, which comes to also stand for the tumultuous circumstances of Guthrie's at the time:

Under the invitation of Nora Guthrie, Woody’s daughter, to tour the Guthrie archives, each of the four songwriters were offered the chance to plumb and mine the plethora of notebooks, scratch pads, napkins, etc. for anything that might inspire them to lend their voices and give the words new life. “These guys worked on an amazing group of lyrics, much of it culled from Woody’s times in LA. Lyric wise, it’s a part of the story that is still mostly unknown. From Woody’s experiences on LA’s skid row to his later years in Topanga Canyon, they are uniquely intimate, and relate two distinctly emotional periods in his life.”

The Library of Congress American Memory archives offer an overview of Woody Guthrie's sojourn in Los Angeles, where he performed on local radio station KFVD. His songwriting from this era sought to present the realities, and not the popular myths, of life in the golden west during the Depression:


Although the perceptions of California as a land of unmitigated opportunity had brought a rush of agricultural laborers from the South and Southwest in the mid-1930s, the reality was quite different. The great farms that stretched across California's rich valleys did need pickers, but so many hands were available that wages were pushed steadily downward, even if a family could find steady employment harvesting the state's many seasonal crops. The pickers lived in their cars, tents, or shacks they built out of whatever materials they could find. These camps were sometimes called "Hoovervilles" and the people in them "Okies."

Although Woody never lived in one of these camps, he did make his way to California as a "Dust Bowl refugee" and traveled around the state singing to the migrant laborers during the spring of 1938. He also sang at government camps that gave these people some measure of dignity, health, and safety.

New Multitudes will be released on February 28 in both a standard or deluxe 2CD format, and will also be available on vinyl. To learn more, visit the New Multitudes Facebook page and follow along with the year's festivities on the official centennial site.
Posted by Matthew